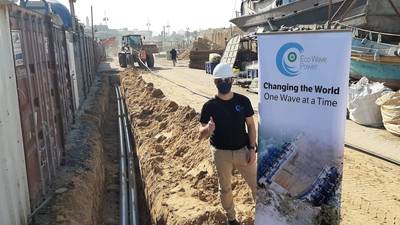 While wave power is still in its infancy relative to offshore wind in the renewable power space, several companies are making step changes that are geared to lead this power source to utlity scale. One Swedish company making the move is Eco Wave Power, which pursuant to the engineering coordination permit from the Municipality of Tel-Aviv Jaffa  for the deployment of the grid connection works of the EWP-EDF One wave energy project, has commenced the grid connection works in the Port of Jaffa, Israel.

The grid connection works are performed in two parts, as they include different routes within the port. The first part is performed by the infrastructure subcontractor Yehimovitz Suissa Ltd. in the shipyard area of the Port of Jaffa, and will be completed by the end of January. Once these works are finalized the company will move forward to the second part of the grid connection route, which will be span across the warehouse area of the port. The works consist of removing the upper layer of asphalt in the dedicated grid connection route and preparing the tunnels necessary for the electric cables.

“We are entering 2021 in full force, ready to push hard for the opening of our second grid connected project, while developing additional projects in our projects pipeline.” said Inna Braverman, CEO of Eco Wave Power.

The Eco Wave Power cable system will span approximately 170 meters of underground cables.  Due to the onshore nature of the Eco Wave Power technology, the grid connection works will be straightforward and will not involve any cable laying on the seabed. 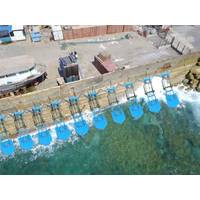