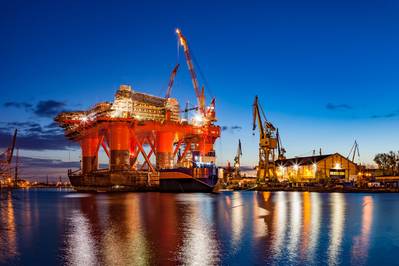 U.S. energy firms added rigs for the first time in eight weeks even as producers follow through on plans to reduce spending on new drilling.

In the same week a year ago, there were 873 active rigs.

That keeps the oil rig count on track to fall for the first year since 2016. The decline, however, only totals 218, which is much smaller than 2015's record 963 rig decline, according to Baker Hughes data going back to 1987.

The oil rig count, an early indicator of future output, has already declined for a record 12 months in a row as independent exploration and production companies cut spending on new drilling as shareholders seek better returns in a low energy price environment.

Even though the number of rigs drilling new wells has declined, U.S. oil output has continued to increase in part because the productivity of those remaining rigs - the amount of oil new wells produce per rig - has increased to record levels in most big shale basins.

The pace of that production growth, however, has slowed.

U.S. crude futures traded around $60 per barrel on Friday, putting the contract on track to rise about 1% for the week as investors cheered progress in resolving the U.S.-China trade dispute and a decisive general election result in Britain.

Cowen said there were 17 decreases, one flat and five increases, implying a 13% year-over-year decline in 2020. This does not include majors, which represent 13% of the rig count and could be flat to up from current levels.

Advisory firm Evercore ISI forecast E&P investment in the United States and Canada would fall about 6% in 2020 for a second year and could decline further.

Evercore ISI, however, noted "The one group of companies which appears most decisive are the majors who we expect to increase E&P spending by a little over 8% next year."

One of those majors, Chevron Corp, this week guided 2020 U.S. upstream spending flat with 2019 guidance, but said it would boost year-over-year spending in the Permian Basin by 11%, Cowen said.

That extra spending is needed in the Permian, the biggest U.S. shale oil basin, where energy firms "will have to drill substantially more wells just to maintain current production levels and even more to grow production," analysts at IHS Markit said in a report this week.

IHS said the base decline rate of the more than 150,000 producing oil and gas wells in the Permian has “increased dramatically” since 2010 "because newer, younger wells decline much faster than older wells."