DONG to Sell O&G Business to Ineos for $1.3 Bln 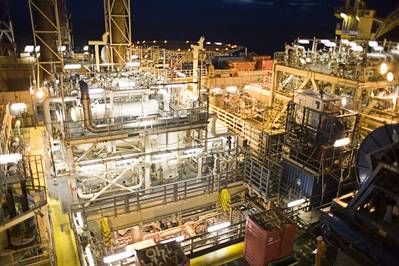 Danish utility and offshore wind farm developer DONG Energy has agreed to sell its oil and gas business to petrochemicals firm Ineos for $1.3 billion, it said on Wednesday, the latest in a string of North Sea deals.
The sale is a blow to shipping group A.P. Moller-Maersk , which had sought to merge its oil and gas business with DONG into a company worth more than $10 billion as part of a major restructuring.
Talks between the two stalled late last year over price, sources told Reuters in December, and Maersk Chief Executive Soren Skou said in January he saw a listing of the energy unit as the more likely option.
For DONG Energy, the world's biggest operator of offshore wind power, the sale marks a step away from fossil fuels as it seeks to focus solely on offshore wind.
"The transaction completes the transformation of DONG Energy into a leading, pure play renewables company," DONG Chief Executive Henrik Poulsen said in a statement.
Ineos, which already owns the Grangemounth refinery in Scotland and last month bought the Forties pipeline system in the North Sea from BP, has been looking to expand into exploration and production.
Deal making in the North Sea has picked up in recent months amid steadier oil prices, following a slump that brought transactions to a halt in the ageing basin.
Ineos joins a number of private equity-backed companies such as Chrysaor and Siccar Point that have in recent months acquired large assets in the North Sea from operators such as Royal Dutch Shell (RYDAF) and Austria's OMV.
Also this month, Neptune Oil & Gas agreed to buy a majority stake in French utility Engie's exploration and production business for $3.9 billion.
Ineos will take over decommissioning liabilities of around 7 billion Danish crowns ($1.05 billion), DONG said, but DONG will retain all hedge contracts related to the oil and gas business, which had a market value of 1.9 billion crowns by end-March.
Nordea analysts said the deal price was slightly below their expectations, but thought investors had probably already factored in a lower valuation. They have a "buy" rating on DONG shares, which reversed early gains to trade 0.4 percent lower at 0848 GMT.
"DONG's sales process, which has resulted in a price in the low end of expectations, shows that it is not easy to sell oil and gas activities in the North Sea in the current oil environment and that Maersk has some work to do ahead of its planned IPO," said Michael Friis Jorgensen, analyst Alm Brand Bank.
The breakdown in talks between Maersk and DONG had opened the way to other bids for DONG's oil and gas business.
Several private equity funds, including EIG Global Energy Partners, as well as exploration company Cairn Energy (CRNZF) and oil and gas firm DEA, controlled by Russian billionaire Mikhail Fridman, had shown interest, sources said.
DONG produced 100,000 barrels of oil and gas per day in 2016, down from 115,000 in 2015. Its main producing assets include the Ormen Lange, Syd Arne and Laggan-Tormore fields.
Ineos will also take over the troubled Hejre field in the North Sea. Development of the field, which is estimated to hold 171 million barrels of oil equivalents, was halted more than a year ago.
DONG cleared a major hurdle this month to its divestment plans after reaching an agreement with Daewoo Shipbuilding & Marine Engineering and Technip over who bears responsibility for construction errors concerning an offshore platform for the idled Hejre field.
"I can't say if and when we make a final decision, but there's significant reserves in those fields that we clearly would be looking to extract," Geir Tuft, head of Ineos' existing oil and gas activities, told Reuters.
($1 = 6.6595 Danish crowns)