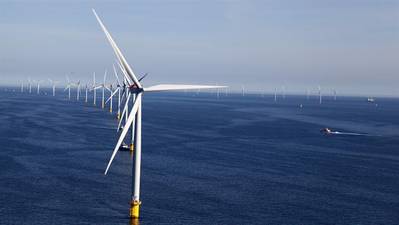 Shares in DONG Energy jumped more than 10 percent on Thursday after the Danish utility and wind farm developer pulled off Europe's biggest stock market flotation this year.
Analysts said the strong debut, coupled with a move by shareholders in E.ON to back the German utility's retreat from fossil fuel, showed investors were growing in confidence about the future for renewable energy as technologies improve and governments commit to curbing carbon emissions.
"It is our clear impression the green transition has a pretty strong momentum," DONG Chief Executive Henrik Poulsen told Reuters. "Our vision is that green energy will be cheaper than conventional energy. It can happen within a decade."
DONG, which has built more than a quarter of the world's offshore wind farms, sold shares in its initial public offering (IPO) at 235 Danish crowns apiece, in the top half of its original 200-255 crowns guidance range and valuing the business at 98 billion crowns ($15 billion).
At 1140 GMT, the stock was trading at 261 crowns, defying a 1 percent drop in Europe's blue-chip stock index.
Analysts said strong demand could also be a sign of renewed risk appetite among investors as they seek to boost returns amid negative interest rates in much of Europe, including Denmark.
Investor confidence was hit earlier this year by China's slowing economic growth, with worldwide share issues slumping to a seven-year low in the first quarter.
DONG's flotation raised a gross 17 billion crowns for the Danish state and a consortium of investors led by Goldman Sachs.
The valuation means Goldman has doubled an 8 billion crown investment made just two and a half years ago, fuelling criticism in Denmark that the previous government sold an 18 percent stake to the Goldman consortium too cheaply.
SUBSIDIES
DONG's listing gives investors the chance to buy into the fast-growing offshore wind sector. The firm has major projects in Britain and Germany, including the 1.2 gigawatt Hornsea 1 which will become the world's largest offshore wind farm, and recently opened offices in the United States and Taiwan.
However, offshore wind power remains one of the most expensive sources of renewable energy and some analysts are concerned about the sector's reliance on government subsidies.
DONG derived 62 percent of its revenue on operational offshore wind farms last year from subsidies and other financial support, such as Green Certificates in Britain.
The cost of producing wind power offshore is about twice as expensive as solar energy.
"Solar power is by far the biggest challenge to the wind industry because it's cheaper, easier to handle, and has lower maintenance costs," said Peter Garnry, head of equity strategy at Saxo Bank.
He said 260 crowns was a "fair value" for DONG's shares.
"But if they don't manage to get costs per unit down for offshore wind power, then in the long run this won't be a very attractive story," he added.
IMPROVING TECHNOLOGY
DONG did not issue new shares, while the government and Goldman consortium sold a combined 17.4 percent stake. The state will retain a holding of just over 50 percent, while the Goldman group will have a stake of 13.4 percent after the flotation.
Gross proceeds could rise to 19.7 billion crowns if the sellers exercise a so-called overallotment option to offload further stock.
DONG has made a net loss for each of the last four years, mainly due to impairment charges on its oil business, but expects to make a profit this year as its wind power business increases and the technology improves.
DONG said more than 36,000 new investors had been allocated shares in the flotation. Private Danish investors were assigned about 10 percent of the 72.8 million shares sold, with the rest bought by Danish and international institutional investors.
JP Morgan, Morgan Stanley (MS) and Nordea were global coordinators for the listing. Citigroup, Danske Bank, UBS, RBC, Rabobank and ABG Sundal Collier and Lazard (LAZ) were also involved.|
($1 = 6.5311 Danish crowns)
(By Jacob Gronholt-Pedersen, Ole Mikkelsen and Nikolaj Skydsgaard; Additional reporting by Ole Mikkelsen; Editing by Jane Merriman and Mark Potter)
Email