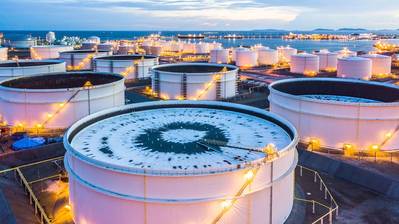 U.S. crude stocks fell much more than anticipated as refineries boosted output near the end of the year, the Energy Information Administration said on Friday.

Crude inventories fell by 5.5 million barrels in the week to Dec. 20 to 441.4 million barrels, far exceeding the 1.7-million-barrel drop expected by analysts in a Reuters poll.

Refinery crude runs rose by 418,000 barrels in the last week, EIA said. Refinery utilization rates rose by 2.7 percentage points, in the week. Overall utilization rose to 93.3% in the week, highest since September, as refiners increased output.

“Finally, after months of waiting, we’re seeing refiners returning from fall maintenance and increasing runs, which has led to a significant decline in crude inventories this week," said Andrew Lipow, president of Lipow Oil Associates in Houston.

"Unfortunately for the refineries, they’re turning that crude oil surplus into additional stocks of gasoline, which doesn’t bode well for refining margins in early 2020.”

Distillate stockpiles, which include diesel and heating oil, fell by 152,000 barrels in the week to 124.9 million barrels, versus expectations for an 800,000-barrel rise, the EIA data showed.