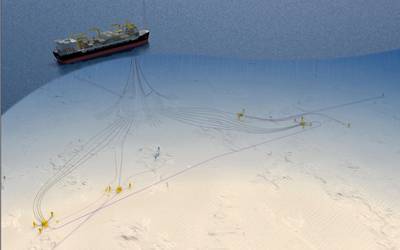 U.S. oil group Chevron (CVX) has a potential buyer for its stake in one of the UK North Sea's biggest oil and gas developments, a company spokeswoman said on Wednesday.

The sale of its 40 percent stake in the Rosebank project would mark Chevron's complete exit from the ageing basin after it launched the sale of its other fields in the region earlier this year.

However, it was unclear if the San Ramon, California-based company was interested in selling out of the project, which is yet to be approved for development.

"Chevron can confirm it has received an expression of interest for its share in the Rosebank project," the spokeswoman said, without elaborating.

The Rosebank project, located some 130 kilometers (80 miles) northwest of the Shetlands in seas over a kilometer deep, would be one of the biggest new fields in the UK North Sea.

With reserves estimated at around 300 million barrels of oil, it could help boost the basin's production.

Other stakeholders in the Rosebank project include Suncor Energy (SU), and privately-backed Ineos and Siccar Point, which is seeking buyers for at least half of its stake in the project.

The partners are currently working on the Front End Engineering and Design (FEED) plan for the field, Chevron said. The complex project is currently estimated to cost over $6 billion, according to consultancy WoodMackenzie.

"If a final investment decision (FID) is taken in 2019, first oil could be in 2024, rising to around 100,000 barrels of oil equivalent per day at peak production," WoodMac said in a note.

Chevron's net daily production in the North Sea in 2017 averaged 50,000 barrels of oil and 155 million cubic feet of natural gas, according to its website.

Chevron employs around 610 people and 220 contractors in the North Sea, the spokeswoman said.