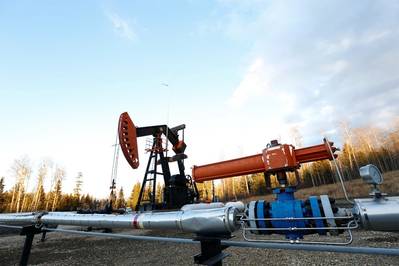 Cenovus Energy Inc's efforts to sell C$5 billion ($3.8 billion) of energy assets, already facing a rocky road because weak oil prices are depressing the appetite for deals, has become complicated by the surprise departure of its chief executive officer, fund managers said.
Brian Ferguson's announcement on Tuesday that he will step down as CEO in October is the latest sign of tumult within Canada's oil sands industry, which has seen international oil majors dump $22.5 billion in assets this year alone.
It follows Cenovus' unpopular, debt-fueled $13.3 billion purchase of ConocoPhillips (COP)' oil sands and natural gas assets in March, which sparked a near 50 percent fall in Cenovus shares.
Cenovus' aim to pay down debt to restore its once-pristine balance sheet now hinges on selling conventional oil and gas assets in a market with a shrinking pool of buyers as oil prices hit 10-month lows around $42 a barrel.
"Everybody knows they are selling and that they have a weak hand. (The divestitures) are not impossible and they have good assets, but it's challenging," said John Stephenson, president of Stephenson & Co Capital Management. He said Cenovus needs to repair its balance sheet and find a credible CEO replacement to look attractive again.
His fund has sold around 85 percent of its Cenovus holding since the ConocoPhillips deal.
Drilling for oil and gas in western Canada is relatively expensive compared with other parts of the world, making these assets less appealing.
Fierce opposition to new crude oil export pipelines like Kinder Morgan (KMI)'s Trans Mountain expansion project and stricter environmental regulations than in the United States are also likely to be of concern to potential buyers.
Cenovus should be able to achieve at least the low end of its divestiture target, said Ryan Bushell, portfolio manager at Leon Frazer & Associates Inc, which is a shareholder. But doing so would depend on commodity prices and finding buyers with a positive long-term view on the oil market, he added.
The pool of potential buyers is limited. Global majors like Royal Dutch Shell (RYDAF) are already pulling out of Canada, and large domestic firms like Canadian Natural Resources Ltd are digesting sizeable acquisitions.
Small and medium-sized companies whose share prices have taken a battering from more than two years of depressed oil prices are likely to struggle to raise the equity to fund acquisitions, analysts said.
"Many shareholders will be wanting management to be prudent and not issue equity at such depressed levels, which will naturally take buyers out of the bidding process," said Jeremy McCrea, an analyst with Raymond James.
Mid-sized conventional producers Painted Pony Energy Ltd and Cardinal Energy Ltd issued equity to fund acquisitions this year, and saw their share prices slump as a result.
For Cenovus shareholders, who are sitting on about a C$10 billion paper loss, ConocoPhillips' impending sale of its 20 percent stake in the company is another factor to weigh on the stock on top of the current challenges.
Ratings agencies DBRS is currently reviewing Cenovus' credit rating, spokesman Scott Anderson said. DBRS placed Cenovus, which it rates BBB, under review with negative implications after the ConocoPhillips deal and said a rating downgrade is likely depending on proceeds from asset sales.