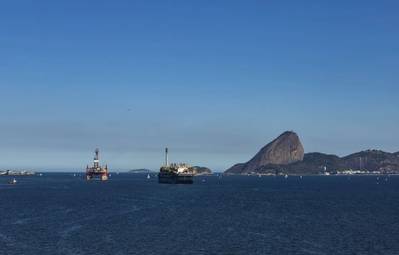 Illustration; An FPSO in Brazil - Image by Ranimiro / AdobeStock

Oil companies produced 3.17 million barrels per day (bpd) on average in Brazil in January, a volume 20.4% larger than seen in the same month a year earlier and an output record for the country, oil regulator ANP said on Wednesday.

Natural gas production increased 22% over January 2019 to 138.7 million cubic meters per day on average last month, also a record. The deepwater, pre-salt field known as Lula accounted for a third of all oil production in Brazil, reaching 1.05 million bpd of crude on average in January, ANP said.

Brazilian oil production is expected to continue to rise in the coming years as several investments in high-yield, pre-salt fields - an area where companies extract crude deeply in the seabed, drilling through a thick layer of salt - go into production.

The Lula field was the first pre-salt bloc to be developed and since its pilot stage has shown above-industry average yields per well.

That field is operated by state-controlled Petroleo Brasileiro SA, which has 65% of the asset. Royal Dutch Shell Plc (RYDAF) has 25% and Galp Energia SGPS SA (GLPEY) 10%.