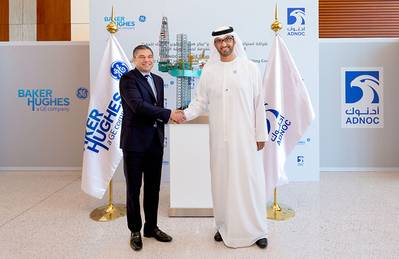 Baker Hughes (BHGE) becomes the first foreign company to take a stake in one of state-owned ADNOC's services companies under the agreement which values ADNOC Drilling at about $11 billion.

It will allow Baker Hughes to cement its presence in the Middle East, the fastest growing region for oil and gas operations, and enable ADNOC Drilling to gain access to the know-how and technical expertise of a global player.

Since its acquisition by General Electric Co last year, Baker Hughes has sought new business models following a sharp decline in global drilling activity since 2014. That includes offering a suite of services to oil and gas producers from exploration to drilling.

"To us this is not just another partnership... this will allow ADNOC Drilling to be not only a local player but a global specialist in the drilling and oil service business," ADNOC's Chief Executive Sultan al-Jaber told Reuters in an interview in Abu Dhabi.

It would help make ADNOC Drilling "the most efficient and the most competitive," al-Jaber said.

Baker Hughes' CEO Lorenzo Simonelli said BHGE will have a representative on the board of ADNOC Drilling and will create a dedicated training team.

The partnership will offer drilling services in the UAE and possibly abroad as well, al-Jaber said.

The transaction is expected to close before the end of this year, with operations starting in 2019, ADNOC and BHGE said in a joint statement.

Al-Jaber said "there are no plans at this point of time" to float a stake in ADNOC Drilling.

Moelis is acting as the financial adviser to ADNOC on the transaction, while Citi is the adviser to BHGE, the two companies said in the statement.