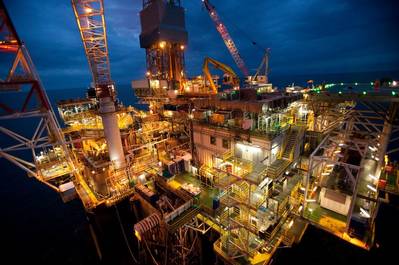 A night view of BP's Shah Deniz Platform located in the Caspian sea, off the coast of Azerbaijan / Credit: BP

Azerbaijan's oil and gas condensate output was flat in January-April at 12.4 million tonnes compared with 12.44 million tonnes in the same period last year, the Energy Ministry said on Thursday.

Natural gas exports from Azerbaijan to Turkey and Georgia in the first four months of the year totaled 4.6 bcm.