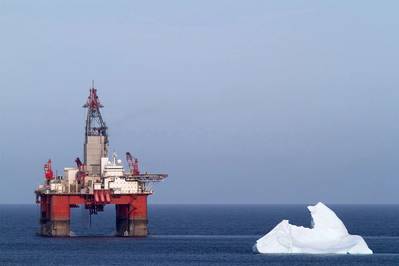 U.S. lawmakers on Wednesday slammed an agreement made with Canada to ban offshore Arctic drilling, saying Ottawa's plan to review its ban every five years gives Canada a leg up on energy exploration.
U.S. President Barack Obama on Tuesday announced a ban on new oil and gas drilling federal waters in the Atlantic and Arctic Oceans, while Canada instituted a similar ban in its Arctic waters.
Unlike the United States, where the ban is indefinite, Canada said it will review its restrictions every five years.
Alaska Republican Senators Lisa Murkowski and Dan Sullivan and Representative Dan Young called the joint announcement "an incredibly lopsided trade for the United States."
"With Russian development already underway in the Arctic, it may be just a few short years before our nation is bracketed by activity on both sides and importing the oil resulting from it," the U.S. lawmakers said in a statement.
Environmental groups said that incoming President Donald Trump would have to go court to reverse Obama's ban. The American Petroleum Institute oil industry group said Trump could likely use a presidential memorandum to lift it.
There is currently no crude oil production in the Canadian Arctic. A number of companies including Chevron Corp, ConocoPhillips (COP) and Imperial Oil Ltd hold exploration licenses, but all three have put their drilling plans on hold, partly because of weak global oil prices.
With Russia's uncontested area accounting for about 50 percent of Arctic waters, the ban probably will not spark additional territorial claims, said Michael Byers, professor at the University of British Columbia.
"Russia has an awful lot of area to explore and exploit on its own without having to even think about encroaching on neighbors," Byers said.
The ban will also delay the need for Canada and the United States to settle a boundary dispute in the Beaufort Sea as there will not be any pressure from companies to do so, Byers said. He noted that no country contests Canada's rights to a 200 nautical mile-wide economic zone along its Arctic coastline.
"By adopting the moratorium, Canada is exercising its sovereign power over those waters and the ocean floor," said Byers. "It's not an abdication of sovereignty but a reaffirmation of it."