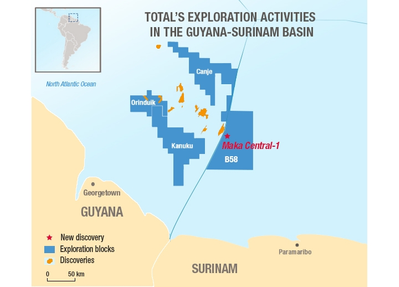 Apache Corp and Total SA said on Tuesday they had made a major oil discovery in a closely watched area off the coast of South America's Suriname, sending Apache's shares surging nearly 27%.

The discovery, dubbed "among the most anticipated in the world" by one brokerage, is seen as central to Apache's efforts to reduce its reliance on the Alpine High venture in Texas' Permian basin, which has suffered from a dive in natural gas prices.

Analysts said it was impossible to ascertain as yet how much oil the well would generate but it is just over the border from Exxon Mobil-led discoveries off Guyana that are estimated to hold more than 6 billion barrels of oil.

Apache said the well in the South American nation confirmed a geologic model with 73 meters of oil pay and 50 meters of light oil and gas condensate pay, with more appraisal planning was underway.

"This discovery could be really transformational for a company that has really been a laggard since the Alpine High discovery," said Michael Scialla, an analyst at Stifel.

Analysts from RBC Capital Markets also called the discovery "significant", but another brokerage, Cowen & Co, warned that the partnership with Total meant it could take years for significant cash flow to reach Apache

Apache's agreement with Total included a $100 million upfront payment, and expenses incurred during the exploration.

The U.S. oil company reported a steady decline in output in the last two reported quarters of 2019, and has reduced drilling activity at Alpine High and warned it may move capital away from the region if gas prices don't recover.

It has also pledged to spend 20% less on capital outlays this year.

"It's binary. Yesterday, Suriname was worth nothing and now: we don't know what it's going to be worth," said BofA Global Research energy analyst Doug Leggate. "For a company of Apache's size, this is a potential game changer."

Suriname had not previously made any commercially viable oil discoveries, and the find also marks a potential turning point for the small country's economy.

"We have to keep our heads cool," the country's President Desi Bouterse told reporters. "Let's eliminate all negativities and find out how we can help Suriname with this enormous find of providence."