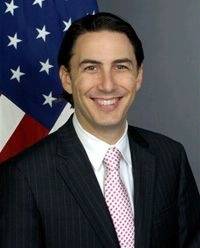 The U.S. State Department appointed Amos Hochstein as the top diplomat for energy affairs as the Obama administration tests using the power of the domestic energy boom to shape policy with foreign energy producers and consumers.

Hochstein has been acting as special envoy for international energy at the State Department's energy bureau since Aug. 1. He succeeds Carlos Pascual, a former ambassador to Mexico and Ukraine, who stepped down over the summer.

As deputy to Pascual, Hochstein worked to help Ukraine, and other European countries, find new supplies of natural gas after Russia invaded it this year. He has also worked on energy issues related to sanctions on Iran and Russia, two of the world's largest oil producers.

Hochstein has worked closely with officials at the White House's National Security Council and government agencies.

An open question for the Obama administration is whether it will chip away at the 40-year-old ban on crude oil exports, a restriction that energy companies and some lawmakers say will eventually slow down the U.S. oil boom that has helped keep global oil prices from spiking in recent years.

In 2011, former Secretary of State Hillary Clinton launched the State Department's bureau of energy resources, where Hochstein works, just as Washington was forming tougher sanctions on Iran over its disputed nuclear program.

Pascual, now a fellow on energy issues at Columbia University, was never confirmed by Congress for the job as assistant secretary for the bureau, amid opposition by some Republican senators.

Hochstein, who early in his career worked in both the House of Representatives and in the Senate, frequently testifies before congressional panels.