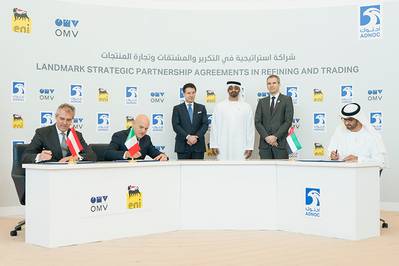 Italy's Eni and Austria's OMV have agreed to pay a combined $5.8 billion to take a stake in Abu Dhabi National Oil Company's (ADNOC) refining business and establish a new trading operation owned by the three partners.

The transaction, which expands ADNOC's access to European markets, furthers Eni's diversification away from Africa and gives OMV a downstream oil business outside Europe. It was hailed as a "one of a kind" deal by ADNOC's Chief Executive Sultan al-Jaber.

"The whole oil and gas industry hasn't seen a transaction of this size and sophistication," he said.

Under the agreement, Eni and OMV will acquire a 20 percent and a 15 percent share in ADNOC Refining respectively, with ADNOC owning the remaining 65 percent, the three companies said in statements on Sunday.

The partners will own the same proportions of the joint trading venture, they added.

The agreement includes output from the Ruwais Refinery, the fourth largest single site refinery in the world.

"We are already well-positioned in Asia and we want to increase our market share there .... but this will also help us to have access to European markets and beyond," al-Jaber said.

Eni has signed several deals in the Middle East in recent months as it expands outside Africa where it is the biggest foreign oil and gas producer.

The company's CEO Claudio Descalzi said the partnership would increase its global refining capacity by 35 percent.

OMV described the deal, which is set to close in the third quarter of 2019, as a major milestone in relation to its "Strategy 2025" plan. It said it would finance the deal primarily out of its cash flow.

"With (this transaction) OMV has established a strong integrated position in Abu Dhabi...spanning from upstream production to refining & trading and petrochemicals," CEO Rainer Seele said.

Al-Jaber has embarked on privatizing its services businesses, ventured into oil trading and expanded partnerships with strategic investors.