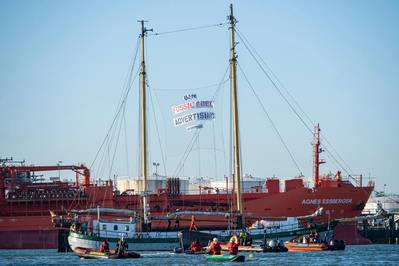 Dozens of Greenpeace activists in Rotterdam port used a ship, buoys and a small flotilla of kayaks on Monday to block traffic around Shell’s Pernis refinery, Europe’s largest, as part of a campaign seeking a ban on fossil fuel advertising.

Police ended the blockade after several hours and the port’s authority said economic disruption to the wider harbor was minimal.

The action comes as Greenpeace and more than 20 other environmental groups began seeking a million signatures for a European Union-wide ban on adverts and sponsorships by oil and gas companies, comparing them to harmful tobacco promotions.

“The EU has already introduced a directive banning cross-border tobacco advertising and sponsorships,” Greenpeace said in a statement issued in the run-up to the COP26 U.N. climate conference in Glasgow.

“Now it’s time for a similar law against fossil fuel industries for the health of the planet and our future.”

More than 20 environmental groups are backing the Ban Fossil Fuel Ads banfossilfuelads.org campaign, including Global Witness, Friends of the Earth and Avaaz.

In Rotterdam, the 33-meter-long vessel The Beluga anchored at the entrance of the “Tweede Petroleumhaven,” Shell’s section of the port, to block traffic, while activists scaled an oil tank.

Shell spokesman Marc Potma said in reaction that the company opposes Greenpeace’s view but supports the group’s right to protest - however, not in this case, as it posed safety risks. 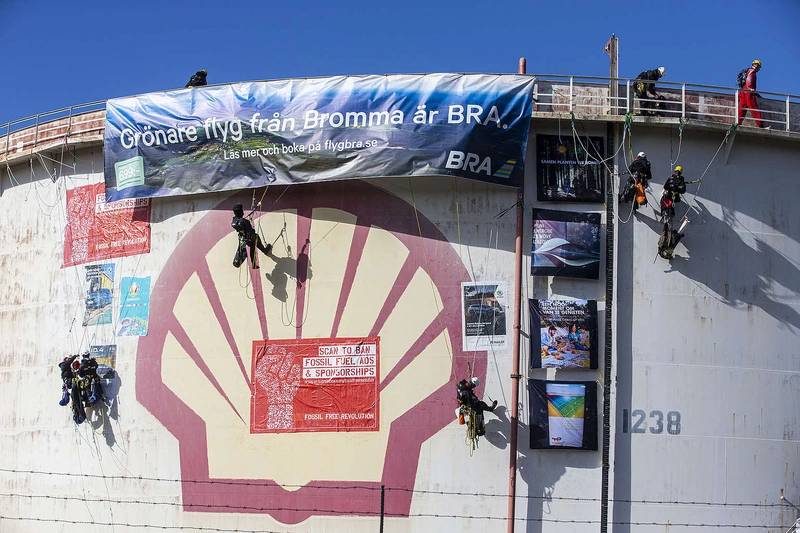 As part of the campaign, Greenpeace published a study of advertisements on social media by Shell, Total, Preem, Eni, Repsol and Fortum over an 18-month period that found in 63% of the ads the companies sought to highlight their environmentalist credentials.

Greenpeace dismissed such ads as “greenwashing”, given that the companies remain among the largest emitters of greenhouse gases.

In responses, Shell, TotalEnergies, and Eni rejected the “greenwashing” label or said they felt justified in profiling their green credentials, given their plans to achieve net zero emissions by 2050. Repsol and Fortum did not immediately respond.

“It’s nice that Shell has a couple of green projects. However, it’s 2021 and ... they are still investing five times more in oil and gas,” said Greenpeace spokesperson Faiza Oulahsen.

“These companies should not be on our televisions or streets, they belong in court.”

In May a Dutch court ordered Shell to cut its greenhouse gas emissions by 45% by 2030, a decision the company is appealing.